Safe Sweden faces up to wave of women's killings

Six women have been killed in just five weeks in Sweden, reigniting debates about domestic violence in a country usually praised for its gender equality.

The deaths span three regions and three generations, but in almost all cases there has been a common thread: the arrest of a man they had had a close relationship with.

Two of the killings took place in broad daylight: one in a rural town centre in the south of the country, another at a train and bus station in Linkoping, a university city south of the capital.

In Flemingsberg, a low-income Stockholm suburb packed with tower blocks clad in primary colours, a woman was stabbed in the apartment she shared with four young children. The man arrested on suspicion of her murder is someone she reportedly knew well.

"I think it has to be brought up to the surface more, this violence against women, because it's not OK," says Kristian Jansson, 51, who's out shopping in Flemingsberg with his 18-year-old daughter Emma-Louise.

The teenager says the recent killings have amplified wider worries about women's safety in the area, where she rarely goes out alone. "I am not so safe... Because there's so [many] people that kill around here."

The recent wave of killings comes amidst growing concerns about violence towards women in Sweden, which has long held a reputation as one of the world's safest and most gender-equal countries.

Sweden's Gender Equality Minister, Marta Stenevi, says she is "both appalled and upset" by the latest violence, but not surprised. "We have in many ways come quite far in gender equality in Sweden, but we still live with the structures in society that suppress women," she says.

Everyday violence, everyday sexual harassment is widespread in Sweden as well as in all other countries

Two weeks ago she set-up cross-party talks on the issue, after politicians from across the spectrum condemned the latest killings and lobbied for tougher action.

Sweden's self-labelled "feminist government" was already halfway through a 10-year national strategy that includes improving education and offering more protection and support to women under threat.

At the end of this month, a new crisis commission will present an update to the plan, which is expected to include longer prison sentences and an increase in the use of electronic tagging and restraining orders.

It's unlikely to face opposition in parliament, although it won't go as far as some parties had hoped. 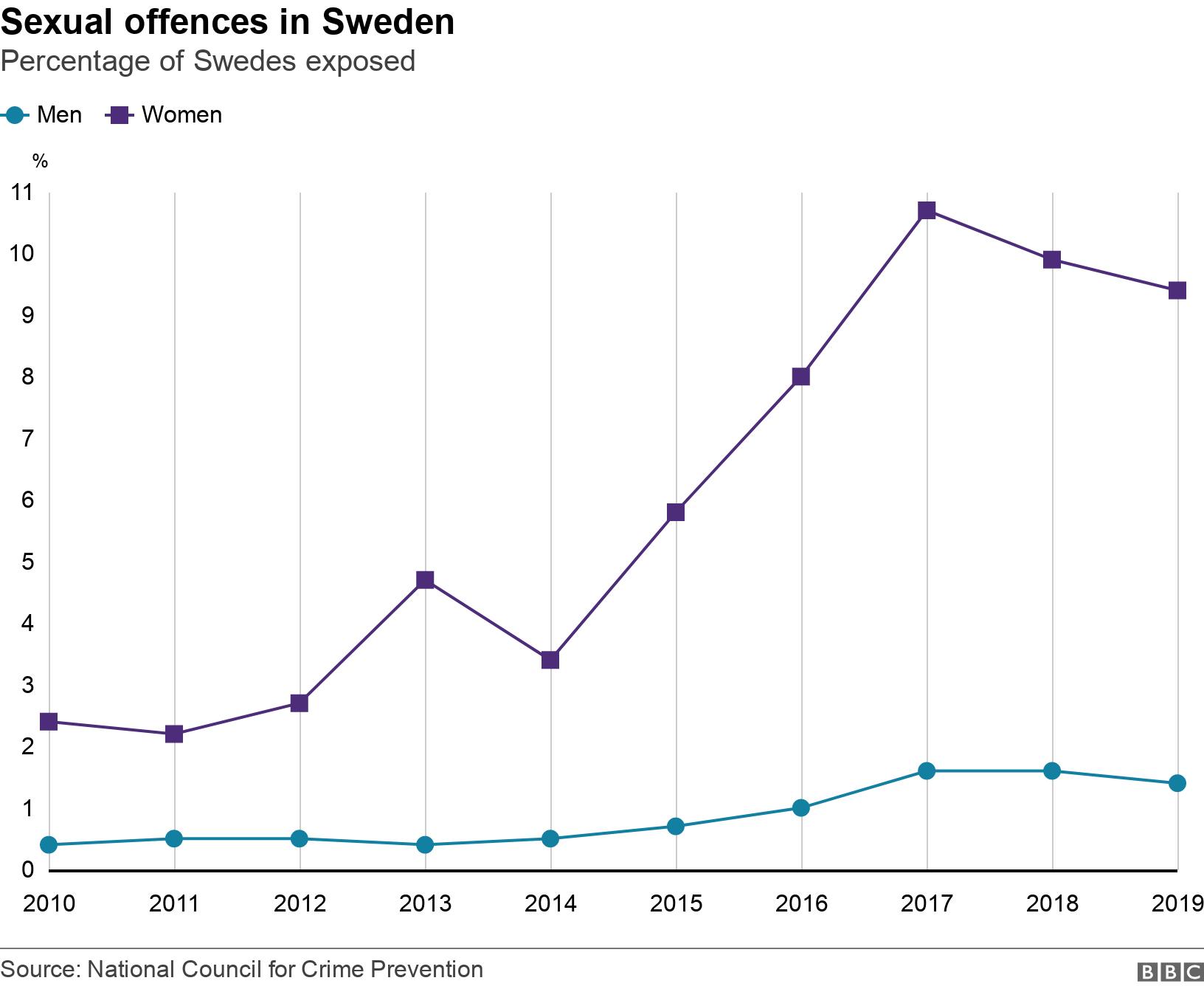 Police have welcomed the renewed focus, with national police chief Anders Thornberg describing women's exposure to domestic violence as "a major problem that requires more action". He says his officers are already prioritising attacks on women and children, with a recent investment in 350 extra staff employed to tackle these kinds of crimes.

But he believes criminal punishments are only a "starting point". He's calling for improved co-operation between Swedish authorities such as health and social services, and for society in general to take the issue more seriously.

'More words than anything'

At the Stockholm headquarters of Sweden's National Organisation for Women's Shelters, Roks, its head Jenny Westerstrand agrees there's been a sense of public fatigue surrounding domestic assaults in recent years that needs to be addressed.

"Many people in Sweden have almost been a bit tired of talking about violence... since it's always on the agenda but never really addressed properly," she says.

But she's hopeful the political and public reaction to the latest killings will prove something of a turning point. "So far, it's more words than anything, but the words are stronger, I think, than before".

One major political sticking point is whether the recent violence should be connected to Sweden's recent wave of immigration. Swedish police don't register criminal suspects according to ethnicity, but prosecutors say several of the men facing trial have non-Swedish backgrounds, and that's been used as ammunition by anti-immigration parties.

In a televised party leader debate last week, the leader of the nationalist Sweden Democrats Jimmie Akesson called for a crackdown on what he described as "imported values" that sanction violence against women.

Sweden's Gender Equality Minister Marta Stenevi says that Sweden does have a problem with so-called "honour crimes", which are committed to protect or defend the supposed reputation of a family or extended community. But she believes labelling violence towards women as an "immigrant issue" is "really, really diminishing the problem", describing violence against women as "deeply, deeply rooted" throughout Swedish society.

Is the pandemic a factor?

Jenny Westerstrand at Roks believes that at least some of the latest violence may be connected to the pandemic. Sweden may have avoided formal lockdowns, but she says the spread of coronavirus has forced women of all backgrounds to spend more time at home.

"They don't seek help as they would if the society was open. So we think that they might be staying in relationships, and things are escalating."

"People who live here, they don't want to accept like Swedish laws," says one 25-year-old woman who asks not to be named.

[Women] can't go out like maybe after 19:00 and they can't wear whatever they want. If you go out here with a very short skirt after 21:00, you are possibly going to be raped

But others, like 28-year-old Sandra Engzell think immigrants have become scapegoats for a much wider problem.

"I don't think it has something to do with where you come from. A woman is not safe with a man who is hitting her, if she's from Africa, Sweden or anywhere else in the world."

More on gender violence in Europe