February 17, 2016. Russian President Vladimir Putin, right, and Hungarian Prime Minister Viktor Orban during a meeting at Novo-Ogaryovo residence in the Moscow Region. © Aleksey Nikolskyi / Sputnik
The solution to the refugee crisis lies in the political settlement of conflicts, particularly in Syria and Libya, President Vladimir Putin said following a meeting with Hungarian PM Viktor Orban. He added that the two share views on the migrant and refugee issue.
Putin was meeting with Orban at his residence outside Moscow.
They discussed a range of issues including the EU refugee crisis and the role of terrorism in causing it. Putin told media after the meeting that the “number one goal” is to eradicate terrorism.
“The reason for the current refugee issue is the destabilization of states in entire world regions – Northern Africa, Afghanistan and other countries. In order to solve the refugee issue the prime cause should be eliminated. The countries’ statehood, economy and social sphere must be restored so that people can live in their own country or return there,” he said.
Putin said that he shared his views on the causes of the refugee crisis with Orban, and that their opinions “largely coincide.”
The two parties agreed to extend a gas deal, which will see Russia supply Hungary until the end of 2019. About 85 percent of Hungary’s gas flows from Russia.
Last year, Putin and Orban signed a new gas deal that replaced a 20-year contract that expired in December 2015. Under the agreement, Budapest is paying only for the gas it actually consumes, as opposed to the volume it contracts, making it a lucrative offer for the low-demand client.
Putin said he’s happy with the quality of relations between Russia and Hungary, though he accepts there has been a drop in trade.
“We are satisfied even despite a well-known drop in trade turnover. We are content with the nature of our relationship,” Putin said, adding that Hungary is an “old and faithful partner.”
“We are really counting that the plans we came up with a year ago during my visit to Budapest, will move forward and come to fruition," Putin added.
The refugee crisis is “an internal problem of the EU” he noted, adding that Russia does not “interfere in these issues.”
He said that “the position of Hungary and its prime minister, which is to defend European identity, the identity of one’s country and people, is likable to us.”
Prior to the tete-a-tete meeting, Orban said that Hungary is interested in “normal” relations between Russia and the EU.
Посмотреть изображение в Твиттере 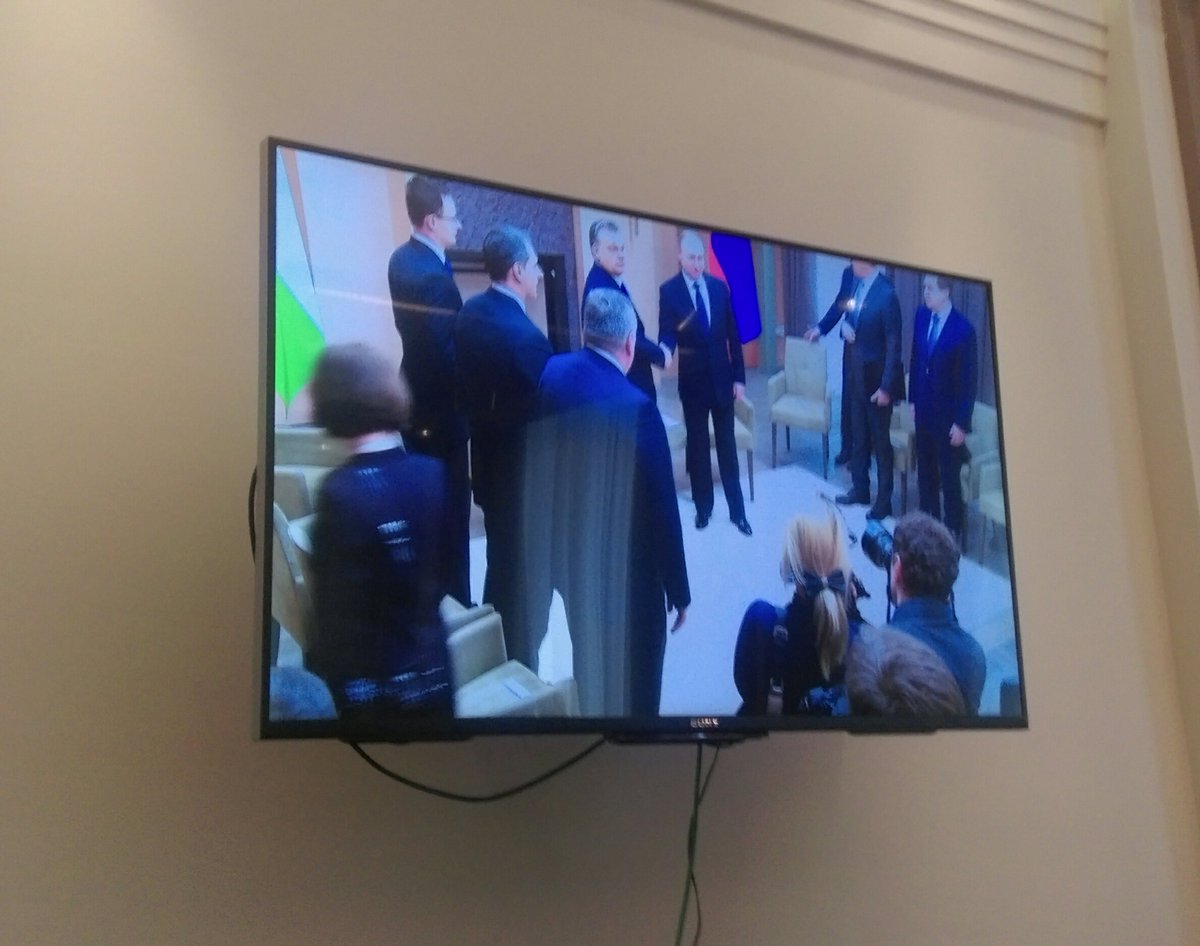 During the press conference on Wednesday, Orban stated that the time for the “automatic” extension of the sanctions on Russia had passed, and that more EU countries are starting to oppose the restrictions on Moscow. “I believe that this period is behind us... I think that in 2016, by mid-year, it will be impossible for the European Union to automatically extend the sanctions... All the countries of the EU are beginning to understand that it is necessary to cooperate. I think there is a chance that we will work together,” he said.
In turn, Putin said that the Kremlin is convinced that the “normalization of Russia-EU ties will happen sooner or later.”
In 2015, during Putin’s visit, which also took place on February 17, Russia and Hungary inked a number of deals, including agreements on expanding Hungary’s Soviet-built nuclear plant and natural gas transit.
The so-called Paks-2 is an important project for both countries. Initially sealed at the end of 2014, the €12.5 billion contract, partly aided by Moscow’s €10 billion ($11.4 billion) loan, would add two new 1,200 megawatt (MW) reactors to the Hungary’s only acting nuclear power plant.
Located on the River Danube, some 100km from the capital, four Paks reactors are currently producing up to 50 percent of Hungary’s electricity. However, Hungary may lose the bulk of its power within the next 20 years, as the remaining reactors would go offline between 2032 and 2037.
Despite the necessity, Paks-2 has been challenged in Brussels, with the European Commission launching an in-depth investigation over its suspected non-compliance with EU rules.
“The Commission's role is to ensure that when public funds are used to support companies, this is done in line with EU state aid rules, which aim to preserve competition in the Single Market,” it said in November 2015.
Although Hungary went along with EU sanctions against Russia, it has been criticizing the decision to isolate Moscow.
“I have made it clear [to Putin] that Hungary needs Russia,” Orban told reporters last year. In 2014, he also said Europe “shot itself in the foot” as the sanctions policy pursued by the West “causes more harm to us than to Russia.”