Why did a former employee kidnap and kill the Sikh family in California?

The police have arrested Jesus Salgado, 48, for kidnapping and killing four members of a Sikh family, including an eight-month-old infant, in California’s Merced County. The suspect was an ex-employee who worked with their trucking business and sent angry texts or emails to them 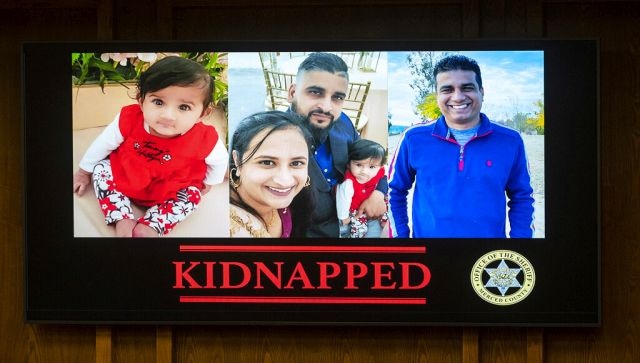 Images are displayed of eight-month-old Aroohi Dheri with her mother Jasleen Kaur, her father Jasdeep Singh, and her uncle Amandeep Singh, at a news conference in Merced, California. The family members, who were kidnapped at gunpoint from their trucking business in central California, were found dead in an orchard. AP

The kidnapping and murders of four members of a Sikh family, including an infant, in California in the United States have sent shockwaves across India. The bodies of Jasdeep Singh, 36, his wife Jasleen Kaur, 27, their eight-month-old daughter Aroohi Dheri, and Jasdeep’s brother Amandeep Singh, 39, were found at an orchard in Merced County by a farmworker on Wednesday. Now, Jesus Salgado, 48, the main suspect has been arrested by police, said reports.

The Merced County Sheriff’s Office said in a statement that investigators identified Salgado, after he used a victim’s ATM card. The family was kidnapped Monday at gunpoint from a business in Merced, the office said, without providing further details, reports The Associated Press.

Detectives received information that identified Salgado as a person of interest and that he attempted to take his own life before police arrived. He is now hospitalised in critical condition, authorities said.

Salgado reportedly worked with the trucking business that the Sikh family ran. Relatives of the slain family told investigators that he had sent angry text messages or emails to his employer about a year ago, Merced County Sheriff Vern Warnke told The Associated Press.

The kidnapper took the baby, the child’s parents and the uncle at gunpoint on Monday and killed them, leaving their bodies in an almond orchard. The bodies were discovered by a farmworker late Wednesday in the remote area near the town of Dos Palos, about 50 kilometres south of Merced.‘A special place in hell’ for the kidnapper

Warnke said that the kidnapper made no ransom demands or contact of any kind. Investigators believe the family was killed before the relatives reported them missing on Monday.

Investigators are also seeking a person of interest who may have acted as Salgado’s accomplice, the sheriff said. According to authorities, the abductor was a convicted robber. Though in critical condition when taken into custody, Salgado has been talking to police.

“There’s no words right now to describe the anger I feel and the senselessness of this incident,” Warnke said. “I have said it before, there’s a special place in hell for this guy.”

Family members told KXTV-TV that the four were taken from an office that they had only opened about a week earlier.

The sheriff said detectives believe the kidnapper destroyed unspecified evidence in an attempt to cover his tracks. The firefighters on Monday found a pickup truck belonging to Amandeep Singh that was set ablaze. Merced Police Department officers went to Amandeep Singh's home where a family member tried to reach him and the couple. When they were not able to reach them, they called the Merced County Sheriff’s Office to report them missing, the office said.

“My husband is a very peaceful and calm person. We don’t have any clue why they kidnapped them,” said Jaspreet Kaur, the wife of the kidnapped uncle.

Relatives of Salgado contacted authorities and told them he had admitted to them his involvement in the kidnapping.

The suspect was previously convicted of first-degree robbery with the use of a firearm in Merced County, attempted false imprisonment and an attempt to prevent or dissuade a victim or witness. Sentenced to 11 years in state prison, he was released in 2015 and discharged from parole three years later, according to the California Department of Corrections and Rehabilitation. He also has a conviction for possession of a controlled substance, the department said.

The sheriff’s office said the Federal Bureau of Investigation, the California Department of Justice, and other local law enforcement agencies are helping with the investigation.

A video released by the sheriff’s office showed how the four family members were kidnapped.

The video released by police shows the suspect checking out the property before speaking to one of the men. He is later seen shoving the two brothers into the back seat of Amandeep Singh’s pickup truck with their hands zip-tied behind their backs.

The kidnapper is then seen returning to the trailer, which served as an office, and led the mother who was carrying the child into the truck before driving off. 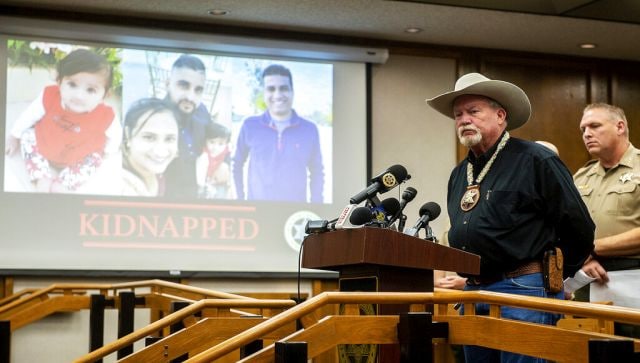 Merced County Sheriff Vern Warnke said that there was a 'special place in hell' for the man who murdered the family. AP

Family members said nothing was stolen from the trucking company but that their relatives were all wearing jewellery.

Relatives of the kidnapped asked owners of stores or gas stations in the area to check their surveillance cameras for images of the suspect or those missing. “Please help us out, come forward, so my family comes home safe,” Sukhdeep Singh, a brother of the victims, said, his voice breaking.

Back home in Punjab, the other relatives of the family are distraught. While Jaspeep Singh hailed from Harsi Pind village in Hoshiarpur his wife Jasleen was from Jandir in Jalandhar.

Jasleen’s father told The Indian Express that their daughter was planning to visit India in January next year. “…we were very excited to see our granddaughter first time since she was born” and had planned to celebrate her arrival.

He said that he was not sure why the kidnapping happened.

Source: Why did a former employee kidnap and kill the Sikh family in California? (firstpost.com)