By Explorer - December 20, 2021
Hamas and Palestinian Islamic Jihad (PIJ) have reached an agreement to step up terror attacks against Israel, especially in Jerusalem and the West Bank.
The Iranian-backed groups also agreed to increase coordination between their military wings, Izaddin al-Qassam Brigades, and al-Quds Brigades. The agreement was reached during meetings of leaders of Hamas and PIJ in Lebanon and the Gaza Strip.

The agreement is seen by Palestinian political analysts as yet another challenge to the Palestinian Authority, whose security forces are continuing to wage a massive crackdown on Hamas and PIJ members in the West Bank

The analysts believe that the upsurge in Hamas and PIJ attacks on Israelis also aims to undermine the PA.
“Hamas and Islamic Jihad are hoping to kill two birds with one stone,” said a Ramallah-based analyst. “They know that the attacks make [PA President Mahmoud] Abbas appear as if he’s losing control of the situation." 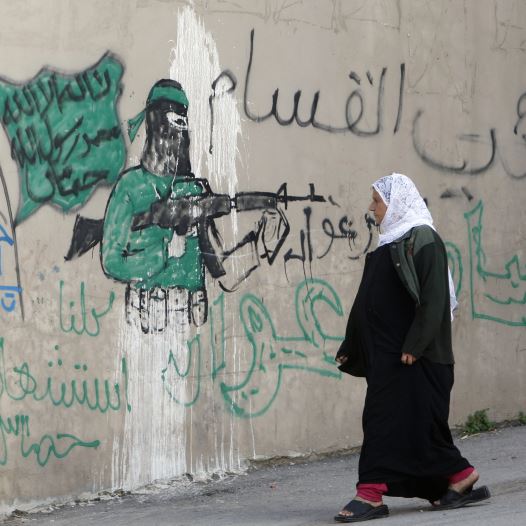 A Palestinian woman walks past a wall with graffiti depicting a gunman from the Al-Qassam brigades, the armed wing of the Hamas movement, in the West Bank village of Awarta. The graffiti reads ''All of us are martyrs.'' (credit: ABED OMAR QUSINI/REUTERS)
A Ramallah official said that the PA security forces have received “solid instructions” from the Palestinian leadership to prevent anarchy and lawlessness in the West Bank. “We will not allow any individual or group to instigate unrest and instability,” the official cautioned. "Hamas and Islamic Jihad are acting against the interests of our people."
A joint statement published by the Hamas-affiliated Palestine Information Center said that the two groups praised the increase in “resistance operations” in the West Bank and Jerusalem, adding that they came in response to “settler terrorism and crimes of the Zionist occupation soldiers.”

The statement was published shortly before Israeli authorities announced the capture of the terrorists who carried out the shooting attack in the Jenin area last Thursday, killing Yehuda Dimentman

PIJ’s military wing on Sunday claimed responsibility for the attack, which took place near the Homesh outpost. The group said that the attack came in response to the IDF’s actions in Nablus, including the killing of activist Jamil al-Kayyal.
Kayyal, a resident of Nablus, was shot when he tried to throw an explosive device towards soldiers who entered Nablus last week to arrest a man suspected of involvement in terror activities.
Hamas and PIJ said that they fully support “all forms of resistance” against Israel. They warned Israel against “the consequences of persisting in its aggressive policies against our people in the occupied West Bank and Jerusalem.”
Hamas and PIJ praised the Palestinians in the West Bank for forming “Popular Resistance Committees to confront attacks by settlers and occupation soldiers.”
The groups condemned the PA for launching a security crackdown on Hamas and PIJ members in the West Bank.
According to Palestinian sources, dozens of Hamas and PIJ members and supporters have been arrested or summoned for interrogation by PA security forces in the past few weeks.

The parents of Omar and Ghaith Jaradat, who were arrested overnight by the IDF for their involvement in the murder of Dimentman, said on Sunday that they were proud of their sons.

The father, Ahmed Jaradat, told the Palestinian Al-Quds News Network: “If my sons did this out of conviction, I’m proud of them. They have sacrificed their life and youth for the sake of Palestine and the al-Aqsa Mosque.’
The mother, Etaf, told Palestinian reporters that she too was proud of her sons.
She said that soldiers raided the family home in the village of Silat al-Harithiyeh, near Jenin, around 2.00 am.
“An [Israeli] intelligence officer told us, ‘Your son Ghaith is a murderer. He was the one who killed the settler in the Homesh operation,’” the mother recounted.
She added: “If my sons carried out the operation, I will raise my head high and be proud of them.”
Responding to the arrest of the terrorists, Hamas said that their capture “will not halt the resistance or undermine the will and determination” of the Palestinians.
Hamas spokesperson Abdel Latif al-Qanou called on the PA to immediately end security coordination with the “enemy.” He also urged the PA to stop its clampdown on Hamas and PIJ members in the West Bank.
Tareq Ezaddin, a PIJ spokesperson in the West Bank, also said that the arrest of the suspected terrorists “will not stop the resistance and the march of jihad.”

The Palestinians, he said, “are determined to continue the revolution and resistance to liberate their land and gain their freedom. Settlements are a legitimate target.”