The children of IS: 'It's a disaster we cannot deal with'

The camp holds about 60,000 people, including 2,500 families of foreign IS fighters

The al-Hol camp is chaotic, desperate and dangerous.

It is home to the wives and children of the Islamic State group's foreign fighters - a tented city, with families crammed together, surrounded by armed guards, watch towers and barbed wire fences.

The sprawling desert camp is a four-hour drive from al-Malikyah, past the city of Qamishli, and close to the Syria-Turkey border, in north-east Syria.

Inside, women dress in black and wear the niqab - a face veil with an opening for the eyes, worn by some Muslim women. Some are aloof, while others are outwardly hostile.

In a corner, near the small vegetable market, shielding from the scorching sun is a group of women willing to chat. They are from eastern Europe.

I ask them how they ended up here, but they give little away, blaming their husbands for the decision to travel thousands of miles to join IS and live under a regime that tortured, murdered and enslaved thousands. Their only crime, they insist, was to fall in love with the wrong man.

It's a familiar story among the wives of IS militants, as they seek to disassociate themselves from a regime which was clear about its brutality and aims. Their husbands are either dead, imprisoned or missing and they are now stuck here with their children.

About 60,000 people are held here, including 2,500 families of foreign IS fighters. Many have lived here since the defeat of the jihadist group in Baghuz, in 2019.

The women speak cautiously, wary of attracting any attention that could have dire - if not deadly - consequences. It's not the guards they worry about, it's the other women - the hardliners still imposing IS rules inside the camp. In the early hours of the morning we were there, a woman was found murdered.

Violence and radicalisation in the camp is a major issue for Kurdish-led Syrian Democratic Forces, responsible for managing the camps.

Dr Abdulkarim Omar, the de facto foreign minister of the Kurdish-led administration in north-east Syria, admits that in al-Hol, IS still rules. He says hardline women are responsible for much of the violence.

"There are daily killings, they are burning tents when people don't follow ISIS ideology," he says, "and they are passing on those radical views to their children."

And there are children everywhere - brought to Syria by their parents from Asia, Africa and Europe to live under IS.

There is little for them to do. Some of the younger kids aim rocks at us as we drive through the foreign sections of the camp. A passenger window smashes, the guards in the car barely miss a beat. This is normal.

Other children are completely passive, staring blankly as they sit outside their tents. Most have lived through unimaginable horrors, constantly on the move as IS desperately tried to defend its territories across Iraq and Syria.

Many have known nothing but war and have never been to school.

Some have visible injuries. I see boy with an amputated leg making his way across the uneven and dusty terrain. All have been exposed to trauma and loss, with most children missing at least one parent.

To deal with the growing violence in the camp, there are regular security sweeps. And that's not all.

Older boys are also viewed as a potential threat. Once they reach adolescence they are moved to secure detention centres away from their families.

"When they reach a certain age, they are a danger to themselves and others, so we have no choice but to build rehabilitation centres for these children," says Dr Omar.

He says they keep in contact with their mothers though the International Red Cross (ICRC).

'Every day he gets older'

To the north of al-Hol, is Roj, a smaller camp also housing IS wives and children. Violence here is less frequent. It's where many of the British women, including Shamima Begum, Nicole Jack and her daughters are living.

The camp is divided by wire fences. I meet a group of women from the Caribbean island of Trinidad and Tobago, which had one of the highest rates of recruitment to IS in the western hemisphere.

One has a son aged 10. She took her children to live under IS and after her husband was killed, they stayed under the regime until the end. She's heard of older boys being separated and is now scared this could happen to her child.

The older he gets, the more she worries. "I sit and every day he gets older, every day goes by. I think that maybe one day they might come and take him," she says.

Nearby her son kicks a football around with his younger brother and sister. His father was killed in an airstrike. He tells me that he would miss his mum if he was moved away from her.

Sanitation here is basic, there are outdoor toilets and shower cubicles and drinking water is shared from tanks, something all the children complain about.

There is a small souk - or market - in the camp, selling toys, food and clothes.

Each month, families receive food packages, clothes are provided for their children. Some live in blended family units. Under IS, a few of the women shared a husband and those bonds have endured as they share childcare and domestic chores.

Many children attend a makeshift school run by Save the Children.

"We hear a lot of stories and none of these stories are positive, unfortunately, but our hope is for them to be able to go home and live a normal childhood and be healthy and safe," says Sara Rashdan, from the group's Syria Response Office.

"We've seen a lot of behavioural change. We saw that they were drawing pictures of destruction, bombardment and war...but now we see that they're drawing more positive images of happiness, flowers, homes."

However, it's not clear how these children will get out, or what their futures hold.

Some western countries view the wives of IS foreign fighters as a threat to security.

Many of the women deny they are a security risk. Yet there's a reluctance among them to discuss IS victims - the thousands of Yazidi women who were enslaved by the group, or the perceived opponents of IS, those they considered heretics, who were murdered or killed fighting the group.

It's commonplace for women to say they didn't see any violent IS propaganda. Despite living in the "caliphate" many claim to be unaware of the beheadings, massacres and genocide committed by the group.

This is a regular refrain of those who joined IS and, for the most part, it's not an argument that holds up to scrutiny. 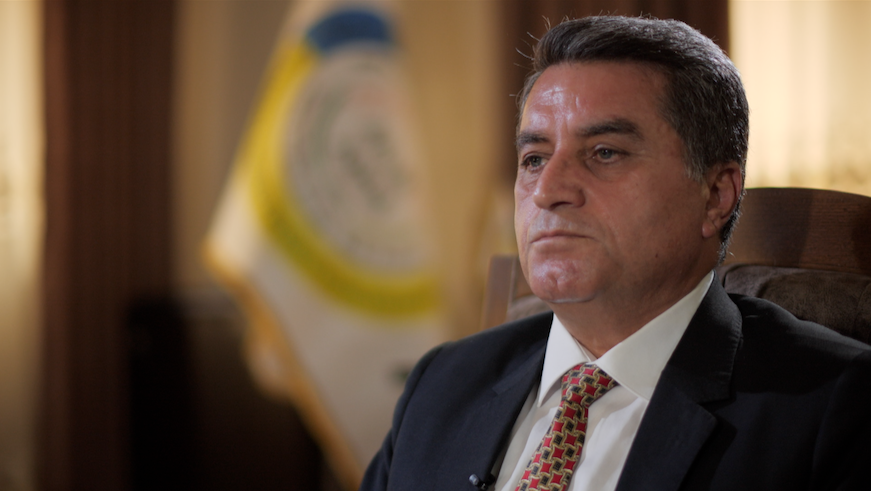 It's an international problem but the international community is not taking their duties and responsibilities towards it. If it keeps going like this we will face a a disaster

Some European countries like Sweden, German and Belgium are repatriating some of the children and their mothers.

But with the situation in the camps deteriorating, the Kurdish authorities are urging more countries to bring their citizens back.

"Its an international problem but the international community is not taking their duties and responsibilities towards it," says Dr Omar. "If it keeps going like this we will face a disaster that we cannot deal with."