In what is the latest cause for celebration in China's scientific community, and also terrific news for most countries, the World Health Organization has listed the COVID-19 vaccine produced by Sinovac for emergency use. This follows the listing of the Sinopharm vaccine on May 7, making the second Chinese vaccine with WHO approval.

Sinovac's vaccine had already been proven 95 percent effective in preventing hospitalization and deaths among front line health workers in Indonesia. With Sinovac now part of the WHO's COVAX program, China's vaccines will play a significant role in ending world vaccine inequality allowing for the equitable distribution of vaccines worldwide.

Numerous western countries have engineered, promoted or demonstrated scepticism about China's vaccines at the level of government, media, the academic community and public opinion. Against this, the approval of Sinovac's vaccine by the WHO's expert panel should put this matter beyond doubt.

From this point onward, hesitancy to accept China's vaccines should be called out for what it is, namely "scientific racism", as initially stated by WHO epidemiologist Mary-Louise McLaws. Governments, media organizations and the general public worldwide have a moral responsibility not to promote vaccine hesitancy through the denigration of China's vaccines.

Indeed, if they were inclined for once to play a positive role in world affairs, they would do their best to promote confidence in the Chinese made vaccines instead.

Recent tensions raised by certain western powers against China are clouding the global discussion around vaccination, a process that has significant human consequences. The truth that remains is that the fight against COVID-19 is a global one and every single administered dose of a vaccine is a step towards the shared success of all humanity.

To allow such an important issue for the common future of humankind to be disrupted by geopolitical tensions would be a severe mistake. The pressure is now on western countries to expedite local approval of both the Sinopharm and Sinovac vaccines, especially with the emerging likelihood that the resumption of global travel will be dependent on common recognition of vaccines across countries.

Having controlled the COVID-19 pandemic in the Chinese mainland, China was well-positioned to produce vaccines for export, with numerous developing countries depending on China in part or whole for its vaccine supply.

Long before the WHO approval, numerous countries shielded frontline health workers and other vulnerable populations with Chinese vaccines including those produced by the now approved Sinovac.

China is currently administering around 20 million vaccine doses per day on the Chinese mainland and I myself wait patiently for the opportunity to receive my first dose of the Sinovac vaccine. 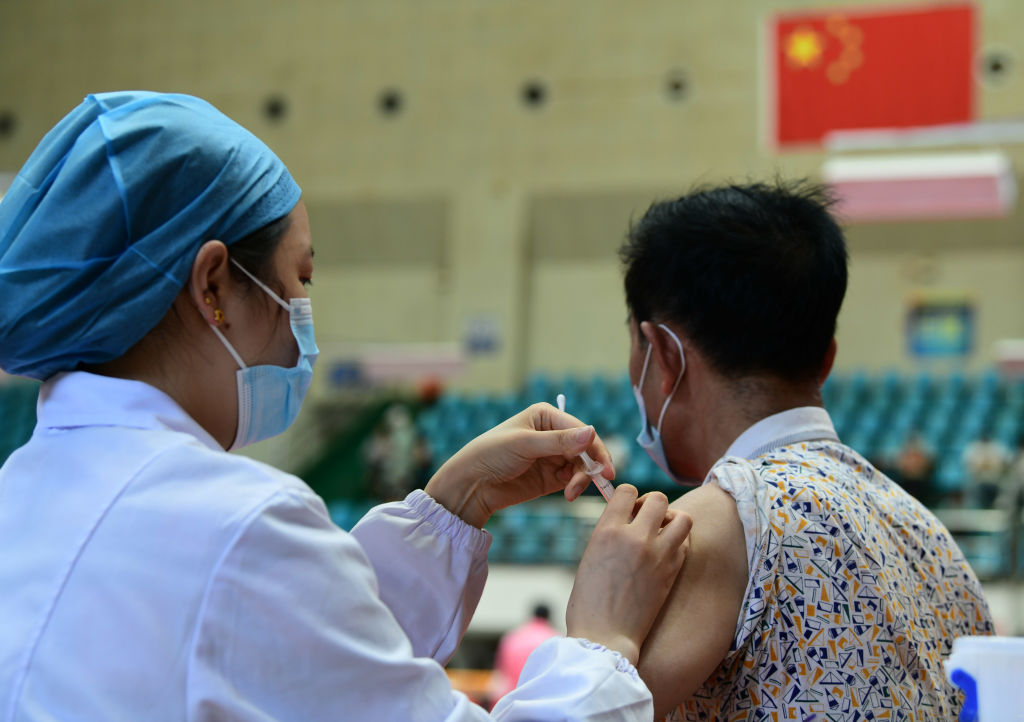 A nurse administers a shot of COVID-19 vaccine at a inoculation site in a gym in Nanchang, est China's Jiangxi Province, May 27, 2021. /Getty

With Sinovac utilizing the inactivated virus method to deliver its vaccine, one of the significant benefits of this approach is its suitability for warmer climates. In most tropical and sub-tropical countries, sub-zero refrigeration is an impossibility in delivering the vaccine to the broader population.

For much of the developing world, therefore, Sinovac will be a leading candidate for its vaccine supply due to its suitability for broad distribution in warmer climates.

Previously, India has been the largest producer of vaccines globally. However, the country is now in both economic and pandemic-related disarray recording both a month of record-breaking COVID-19 cases, deaths and a record economic contraction.

India will surely need to turn its production capability toward its population and the alarming spread of COVID-19 cases to have any chance of turning its fortunes around. As a result, China is likely to emerge as a far more reliable vaccine supplier for most countries and has developed an estimated yearly production capacity of up to 5 billion doses.

Dealing with COVID-19 might, unfortunately, be the new normal. However, thanks to China's development of vaccines and its enormous production capacity, it seems likely that another new normal in many parts of the world is the enduring presence of Chinese vaccines.

In fact, it has recently been argued that India should be importing Chinese vaccines to deal with its present crisis. Its political leaders need to choose between unjustified pride and saving people's lives.

As noted by Andy Muhkerjee, a Bloomberg Opinion columnist, "Indian politicians of all hues will find it hard to suddenly advocate vaccines from Sinopharm and Sinovac Biotech Ltd. Yet what can be a bigger national interest right now than saving Indians from avoidable death and durably reopening the economy?"

This is a valid question not just for India but for the entire world. After a year and a half of living with COVID-19 restrictions, I'm sure that deep down, we are all looking forward to the day when the world feels like a more open place. Getting to that place is going to require a shift in thinking about Chinese vaccines.

(If you want to contribute and have specific expertise, please contact us at opinions@cgtn.com.)