The Germany-Namibia genocide accord is on track to be ratified by the Namibian parliament. But Namibian Vice President Nangolo Mbumba is not happy with the amount of money pledged by Berlin.

A German infrastructure program for Namibia — worth €1.1 billion ($1.4 billion) — was no adequate compensation for an early 20th century colonial-era genocide,  the Southern African country's vice president said on Friday.

"We need to recognize that the amount of 1.1 billion euros agreed upon between the two governments is not enough and does not adequately address the initial quantum of reparations initially submitted to the German government," Vice President Nangolo Mbumba told a press conference.

"No amount of money in any currency can truly compensate the life of a human being."

Mbumba is only  the latest Namibian public figure to criticize the amount offered on May 28 by former colonizer Germany for the massacre of tens of thousands of Herero and Nama people from 1904 to 1908.

The politician also said that Germany "has agreed to commit to revisit and renegotiate the amount as the implementation of the reparations ensues."

The bilateral deal has yet to be ratified but will likely be approved by Namibian lawmakers. 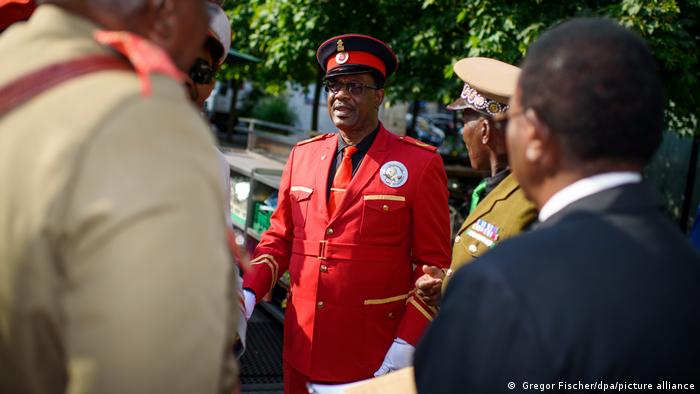 Why is the deal controversial in Namibia?

The two nations reached the financial agreement last week as part of a deal in which Germany acknowledged the massacres were a genocide. The accord marks the end of negotiations that had begun in 2015.

Many Namibians have since rejected the outcome of the talks and dismissed the offered amount as insulting. They called on Germany to directly compensate victims in the form of "reparations" — a term Berlin has pointedly avoided. Many are also angry over a statement by German Foreign Minister Heiko Maas, who said that the killings were a genocide "from today's perspective."

German President Frank Walter-Steinmeier is expected to give an official reconciliation speech to the Namibian parliament, although the date for his visit has yet to be announced. In an interview published by German tabloid newspaper Bild on Saturday, a senior Herero chief, Vikuii Reinhard Rukoro, warned that some opposition politicians were planning to disrupt Steinmeier's address. Rukoro also said he himself wanted to "expose" Germany and cause a diplomatic incident.

Previously, Vice President Mbumba urged Namibians to "remain calm" and "think deeply" about their response to the deal.

"We have made remarkable progress over the past five years of negotiations and there is an opportunity we should not waste," he added.

Zed Ngavirue, the chief negotiator for the Namibian government said he was confident in the deal and that he expects it to be formally approved:

"I'm satisfied that we arrived at a common understanding," he told DW on Thursday.

Ngavirue also defended the amount of financial aid agreed under the deal. "The damage that we suffered is incalculable. Loss of life, loss of land, loss of stock, slave labor and so on. When you are negotiating with another party, you want to know what is realizable," he said.

The agreement is being reviewed by Namibia's Attorney General and will be presented to parliament for ratification next week.

If Namibia's parliament ratifies the document, it can be signed by the foreign ministers of the two countries.

Mbumba said all ethnic groups will be called upon to make sure the agreement is successful and to help plot a path toward the future. "A lot of work lies ahead," he said.