The patriarch of Ethiopia's Orthodox Church recently ignited controversy when he said that genocide was being committed in the northern Tigray region.

His Holiness Abune Matthias - an ethnic Tigrayan himself - explained that since the outbreak of conflict in November between the Ethiopian military and the Tigray People's Liberation Front (TPLF), his "mouth had been sealed, unable to speak from fear".

Abune Matthias' emotional statement resonated with many Tigrayans, who are deeply traumatized by the violence in their region. More than two million people have been displaced in the conflict.

Through protests in capitals around the world and via social media, members of the diaspora have united to campaign against what they insist is genocide.

The Ethiopian government rejects reports of mass atrocities as exaggerated and politically motivated. Breaking with the traditional hierarchy of the Ethiopian church, the Orthodox Synod distanced itself from the patriarch's statement.

In popular parlance, genocide is the crime of crimes - the very worst on the books. It evokes a special outrage - campaigners against genocide call for exceptional international responses, including military intervention, to stop it.

The term was invented by Rafael Lemkin, a Polish lawyer of Jewish descent, to describe the uniquely terrible crimes perpetrated by the Nazis against entire peoples.

It won a special place in the international statute books when the United Nations formalized the Genocide Convention in 1948.

In the trials of high-ranking Nazi officials at Nuremberg, prosecutors had brought charges of crimes against humanity - defined as widespread and systematic violations perpetrated by a state or a state-like entity.

Genocide is a different kind of crime, defined by the perpetrator's intent: "to destroy, in whole or in part, a national, ethnic, racial or religious group, as such." 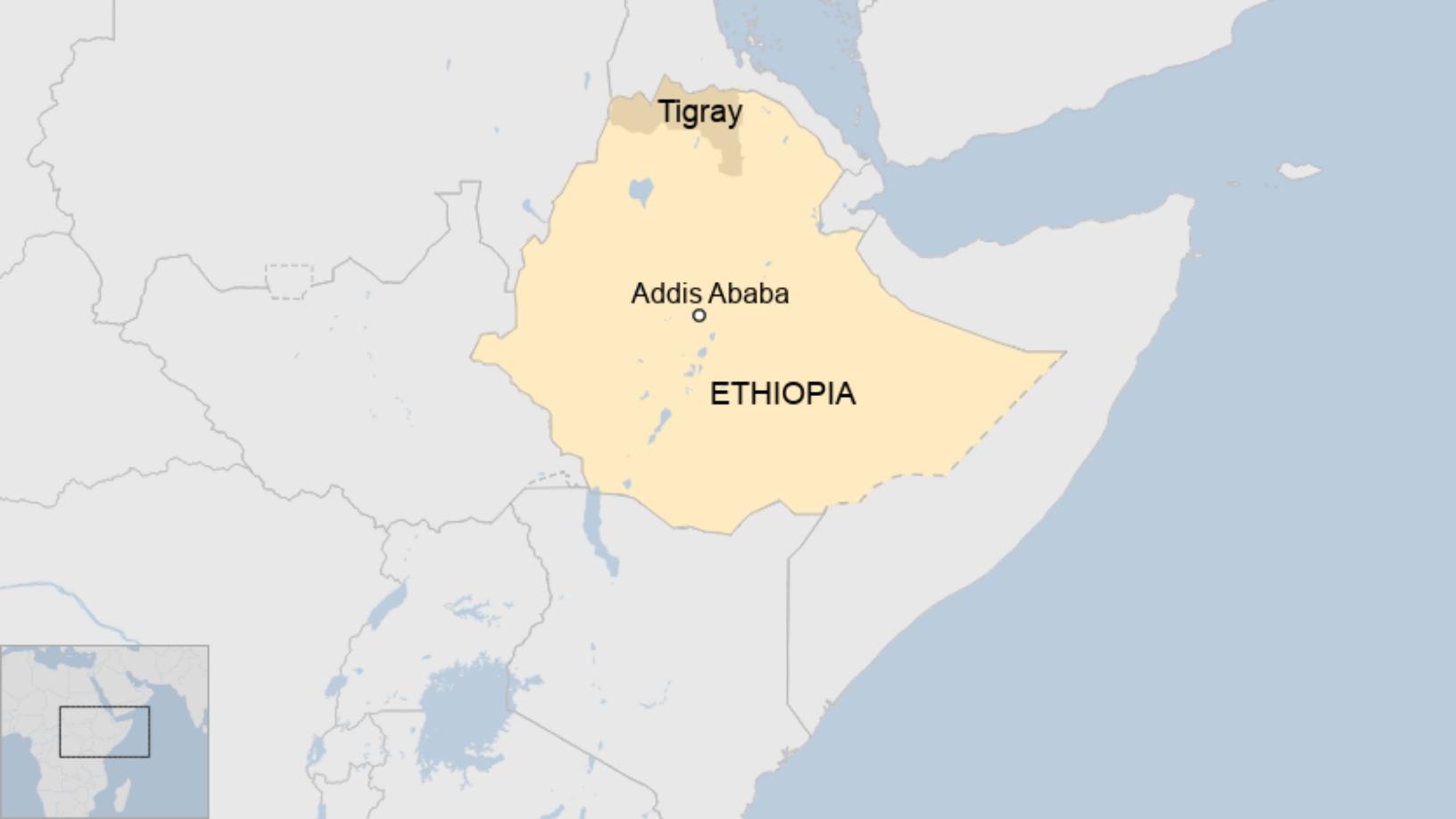 Until now, human rights organizations have said that crimes against humanity may have been committed in Tigray. That may change.

Some Ethiopian media have expressed ethnic animosity towards Tigrayans, with derogatory language used indiscriminately to tar all Tigrayans with the alleged misdeeds of the TPLF, which was in power at a federal level for more than 25 years and had a bitter fall-out with Prime Minister Abiy Ahmed after he took office in 2018, resulting in the conflict in its stronghold of Tigray.

Dehumanizing words such as "daylight hyenas" and "unfamiliar others" are used to foment hatred.

There are reports of ethnically selective purges of Tigrayans from government employment and the army, and restrictions on their travel, businesses and residence.

These violations aren't in themselves as heinous as murder, rape, or starvation but they would be important to building a case for genocide.

There have also been numerous reports of mass killings in Tigray, by all sides.

The definitive determination of whether it is genocide would be a guilty verdict in the trial of a high-level perpetrator - preferably in the International Criminal Court (ICC).

But for the ICC to take on a case would require a decision by the UN Security Council, which is highly unlikely given African suspicions of the court and the objections of China and Russia.

Another possibility is the prosecution of an Ethiopian who is dual national of another country - perhaps for statements in the media that could be taken as incitement. Or there could be an arrest warrant issued by a magistrate by a state that has universal jurisdiction, such as France or Belgium.

Ethiopia has itself previously prosecuted genocide. Its 1957 penal code prohibits genocide with an important variation - it includes "political groups" among those protected.

This is a legal curiosity that arose because Ethiopia used one of Lemkin's early drafts for the UN Convention, before the Soviet Union insisted that targeting political groups shouldn't be included.

Lemkin himself was particularly concerned with food deprivation as a tool of genocide.

In his book Axis Rule he devoted more space and attention to Nazi policies of limiting food rations to starvation levels than to gas chambers and killing squads.

The term "starvation crimes", coined by Bridget Conley, is becoming common usage for the varieties of ways in which hunger is used as a weapon of war, oppression and punishment.

The UN, US and UK have all warned this week of an impending large-scale famine in Tigray. The dire situation is the result of "starvation crimes" including pillage, forced displacement, destruction of food, water and health facilities, widespread rape that prevents survivors from caring for themselves and their children, and obstruction of humanitarian aid.

Thirty years ago, when Ethiopia set up a Special Prosecutor's Office to try officials of the ousted military regime of Mengistu Haile Mariam, it was decided to use genocide charges for political killings.

The main focus was the "Red Terror" of 1977-78 when the regime murdered tens of thousands of young people for their real or suspected political alignments.

Mengistu was convicted in absentia for genocide on this basis in 2007 - 40 years after his most egregious crimes.

Campaigners don't want to wait until judges hand down a verdict. When proof of genocide is finally forthcoming it is by definition too late to prevent it.

To get around the problem, activists and diplomats have coined new words to describe patterns of ethnically targeted atrocities.

As Yugoslavia broke apart in the early 1990s, the term "ethnic cleansing" was coined.

This isn't codified in law - and acts such as targeted killings and rapes and forced displacement that make up ethnic cleansing aren't distinct from the actions that could constitute genocide.

An internal US state department report referred to "ethnic cleansing" in western Tigray earlier this year.

Ten years after the Yugoslav war, the former US special envoy for war crimes, David Scheffer, introduced the term "atrocity crimes" to try to short-circuit what he saw as fruitless legal debates on what counted as genocide.

He argued that "governments and international organizations… should not be constrained from acting by the necessity of a prior legal finding that the crime of genocide in fact has occurred or is occurring".

More on the Tigray crisis:

There's also a grey area of localized, ethnically targeted violence. This kind of conflict is rife across Ethiopia, involving many different communities.

There are contested boundaries between ethnically defined regions and disputes over the status of minorities within regions dominated by another group.

Violence of this kind has recently increased, with ethnic Oromos, Amharas, Somalis and Gumuz, among those swapping accusations of atrocities.

Spokespeople for these groups commonly portray themselves as victims of genocide.

Crying "genocide" sounds the alarm but doesn't spell out a clear course of action.

The peril of a singular focus on "genocide" is illustrated by the international campaign against atrocities in Darfur in 2004.

Activists focused on calling the atrocities genocide: they assumed that once their governments designated it as such, they would be required to send troops.

One protester's sign at a Washington DC rally read: "Out of Iraq, Into Darfur!"

In fact there's no such obligation. An inquiry sponsored by the US state department did indeed find that the Sudanese army and associated Janjaweed militia had committed acts of genocide.

Then-US Secretary of State Colin Powell accepted the report, but said that this finding did not change US policy, which prioritized humanitarian aid, a peacekeeping mission, and a peace agreement.

In Darfur, the debate over whether the atrocities were or weren't genocide became a distraction from dealing with what actually could be done to stop the atrocities.

The US designation of "genocide" was purely symbolic, and when the UN's International Commission of Inquiry on Darfur stopped short of calling it a genocide, the Sudanese foreign ministry trumpeted a victory, overlooking the inquiry's careful wording that "crimes no less serious and heinous than genocide" had been committed.

The prosecutor of the ICC later issued an arrest warrant against President Omar al-Bashir, which included charges of genocide. Bashir was imprisoned by the Sudanese authorities two years ago after he was overthrown, but he hasn't been handed to the ICC.

The trial of a militia leader, Ali Abdel Rahman "Kushayb" opened on 24 May at the ICC on 31 counts of crimes against humanity and war crimes - but not genocide, which lawyers suspect will be very hard to prove.

If Bashir does face trial at the ICC, prosecutors will also have to weigh whether to proceed with genocide charges.

Today's senior officials in Washington DC include veterans of those bruising debates from Yugoslavia to Darfur.

At Thursday's hearing of the US Senate foreign relations committee, Tigray was compared to Darfur.

At the hearing, a state department official said they were considering financial sanctions against Ethiopian officials allegedly responsible for failing to stop atrocities in Tigray.

The state department also said that a legal team was investigating whether the atrocities amounted to crimes against humanity.

But there's little appetite for considering whether it is genocide, fearing it will inflame emotions that would impede, not facilitate, solutions.

Alex de Waal is the executive director of the World Peace Foundation at the Fletcher School of Law and Diplomacy at Tufts University in the US.