Hairdresser Cesar Moncado fled Honduras when gangs demanded protection money. He hopes to build a better future for his children in the US. Ines Pohl and Carolina Chimoy report from Miami.

"Work, work, work!" That's the first thing Cesar Moncado thinks about when he wakes up in the morning. "That's the most important thing for me at the moment," the 38-year-old father of two tells DW.

He only arrived in the US one month ago and is staying with distant relatives. For now, he and his family are safe from drug gangs and racketeers.

It took them two months get from their home village in Honduras to the US-Mexico border. He and his wife walked for long distances with their 17-year-old daughter and nine-year-old son. They took the bus when possible. An NGO helped them to cross the border —legally. 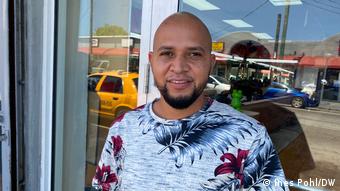 Cesar Moncado is hopeful for the future

Moncado says that he is grateful to President Joe Biden for allowing families to enter the US as an entity. He says that former President Donald Trump would not have allowed this exception.

Nonetheless, he says, he would have tried to get in illegally because he had no choice. Even if he would probably have had to wait for hundreds of thousands of others in a camp and would have been in constant fear of being sent back to Honduras.

'They would kill us!'

When he talks about his hopes for the future, Moncado speaks clearly with an open gaze. But he is nervous when talking about the past. His eyes flicker from left to right, as if he is checking out the surroundings, making sure it is safe to talk. His answers are short.

He explains that he used to own a hair salon in a village where many of his relatives also lived. Business was good enough that they could survive. But then the gangs turned up and demanded protection money. They threatened him and eventually took away his salon. He felt that he had no choice but to leave. He was encouraged when Biden said that families should be allowed in and that their legal status should be verified on US soil.

Cesar says that he does not have much contact with friends and family in Honduras these days. He says that he is "disappointed" but refuses to elaborate. His pain at losing his home and loved ones is palpable, as is his disappointment that so little is being done to fight corruption and violence.

Many people share Cesar's feeling that the only options are to go along with the situation or escape. 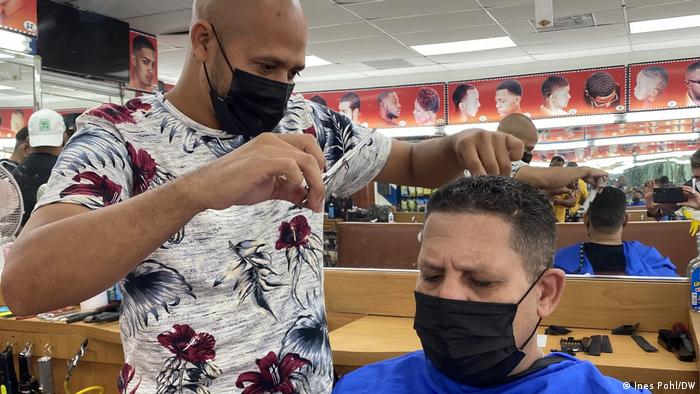 Moncado lost his hair salon in Honduras to organized crime

In the US, Cesar's family might be safe from the gangs in Honduras, but they face other challenges: "Now we have to wait for the papers to get asylum." He is glad, however, that he and his wife have both found work: She is working at a vegetable market, while he is trying to set up a hair salon in the north of Miami, a city that attracts people from all over Latin America who are all struggling to make a living. It will not necessarily be easy for him to build up a loyal clientele that fast, but he is trying to be patient. After all, the family is settling down and the children will be able to go to school in September. The worst is over.

"The worst was when we had to sleep on the street in Mexico and when migration police persecuted us and caught us. That was the worst." They were locked up for days and did not know if they would be sent back to Honduras.

"Now, it's my dream to see my children fulfill their dreams."

This article has been translated from German.

Central American refugees dream of better life in US