‘Discriminated even in death’: How Indian soldiers battled racism overseas during World War I

Racism played a defining role in the recruitment and treatment of the soldiers of colour being appointed from the colonies.

In the latter half of the 19th century, most British administrators regarded India as “an English barrack in the Oriental seas” from which they may draw any number of troops without paying for them. India provided an immense reservoir of cheap manpower for the British military. Consequently, when the First World War began, the Indian Army alone provided 1.2 million men with its soldiers deployed in all major theatres of war, and making up approximately two-thirds of the military serving in Mesopotamia. As author Shrabani Basu notes in her book,‘For king and another country’, “this was the largest volunteer army from any of the colonies, and more than the combined armies of Scotland, Northern Ireland and Wales”.

A recent report by the Commonwealth War Graves Commission (CWGC) reveals that an estimated 45,000 to 54,000 casualties of the war, predominantly Indian, East African, Egyptian and Somali personnel were commemorated unequally. A further 116,000, which could potentially go up to 350,000 were either not commemorated by name or not commemorated at all. “Underpinning all these decisions, however, were the entrenched prejudices, preconceptions and pervasive racism of contemporary imperial attitudes,” suggests the report.

“The irony is that in Europe where the Indian soldiers fell, their graves were kept in beautiful condition. But where they fell in Africa, the Middle East, Iraq, Palestine, there they did not bother commemorating them,” says Basu, who was also part of the special committee reviewing the historical inequalities in commemoration. “This was clearly racism. During our research, we came across comments like the one by General Cox from the Indian army who says that we don’t need individual headstones for Hindus and Muslims because it is of no importance to them,” she adds.

Racism, as several historians note, was an important aspect of the First World War. “While purely military and political considerations often shaped strategy during the war, ideologies of race and racism also played a role, helping in particular to make the war a genuinely global one,” writes historian Richard Fogarty in the article, ‘Race, racism and military strategy’, published by the British Library. To begin with, in the course of the 19th century, ideas of racism had developed and become a most prominent preoccupation across Europe. Race, in fact, was the most important factor justifying colonialism. Unsurprisingly, it also played a defining role in the recruitment and treatment of the soldiers of colour being appointed from the colonies.

When it came to recruiting forces in the colonies, racism assumed its most sinister forms in the form of the martial race theory. Indian society was divided into martial and non-martial groups. “Accordingly, most of the martial races were concentrated in the north-western part of the Indian empire, mainly Sikhs, Pathans, Baluchis and some selected Muslim communities, beside Gurkhas and Dogras,” writes historian Aravind Ganachari in his book, ‘Indians in the First World War: The missing links’.

Lord Roberts, the Commander-in-chief in India between 1885 and 1893, was the father figure of the Martial Race Theory. He was of the belief that the heat in India was responsible for the degeneration of martial capabilities. “Many military officers both in Britain and in India believed that the cold, climatic mountainous regions generated better warriors,” writes historian Kaushik Roy in his article,‘Race and recruitment in the Indian army: 1880-1918’. The basic premise of race here was that those communities in the Indian subcontinent that lived in regions which resembled the climate in Britain were more healthy and better suited to go to war.

Shantanu Das in his book ‘Race, empire and First World War writing’, notes that imperial racist hierarchy was often internalised by the colonised, resulting in self-esteem and confidence. “Being constantly made to feel small before the allegedly ‘superior’ civilisation of Great Britain and with the fraught memories of the Sepoy Mutiny of 1857, Indian middle-class national discourse seized upon war service in Europe as an opportunity towards establishing racial equality and proving their courage and loyalty,” writes Das, a Professor of Modern Literature and Culture at Oxford University. During a march past of Indian troops, a woman pins flowers on to the tunic of one of the soldiers. (Imperial War Museum)

He cites the example of a wartime speech made by the Congress leader Sarojini Naidu in Madras, 1918: “Let young Indians, who are ready to die for India and to wipe from her brow the brand of slavery, rush to join the standing army or, to be more correct, India’s citizen army composed of cultured young men, of young men of traditions and ideals, men who burnt with the shame of slavery in their hearts, will prove a true redeemer of Indian people”

Racism in treatment of colonial forces in the war

It is important to note that before the First World War, the British had regularly used colonial troops for imperial defence but never in Europe or against another white community. “Indian troops were not allowed to fight in the Boer War in South Africa (1899 – 1902). If a ‘coloured’ man were trained to raise arms against another European, what guarantee was there, so the racial thinking went, that he would not one day attack his own white master?” notes Das, in his article, ‘Experiences of colonial troops’.

However, things changed after heavy casualties were suffered by the British Expeditionary Force in August 1914. Two divisions of the Indian Army were then diverted to France. “Among the colonial non-white troops of the British empire, only Indians were allowed to fight in Europe. This was predominantly due to racial categorisation in British military policy.” writes Das.

Basu says that in the thousands of letters written by Indian soldiers in Europe, that she went through for her research, she did not find any element of racism in the way they were being treated by the officers. But there was an underlying distinction in the treatment between the Indians and the British. “To begin with, the salaries of an Indian soldier was far less than the equivalent Tommy’s salary. Secondly, even the highest ranked Indian soldier is lower than the lowest ranked British soldier,” says Basu.

The other element of racism, says Basu, is when an Indian soldier is injured and admitted in hospital, white nurses are told not to look after them. “The British authorities were very strict about no romances developing between lonely white women and Indian soldiers who were also alone,” she says.

Das, in his book, cites heavily from the diary of the Rajput aristocrat Thakur Amar Singh who was part of the Lahore regiment during the war. Singh served intermittently in France from December 1914 to December 1915 and in January 1916 joined the brigade in Mesopotamia. His personal account sheds important light on the discrimination being faced by Indian soldiers on the battlefield.

Experiences penned down by Thakur range from the refusal of English soldiers to not salute him (though he was a King’s commissioned officer), to being teased for not eating beef or being asked to leave the room when important military details were discussed. “When Amar Singh suggested sending an all-Indian force to Egypt, General Brunker had turned on him ‘fiercely’: ‘you can’t fight with native troops only,” records Das.

“The great trouble under which we have laboured is that whenever we fail in the slightest degree anywhere people raise a hue and cry whereas if the British troops fail under the same circumstances no one mentions it,” writes Singh in his diary as cited by Das. What comes across through his notes is the general frustration with the racist ideology of the British army. One of the officers, General Wilcocks is noted to have believed that the Indian soldier can “never replace the natural instincts of the white man”. 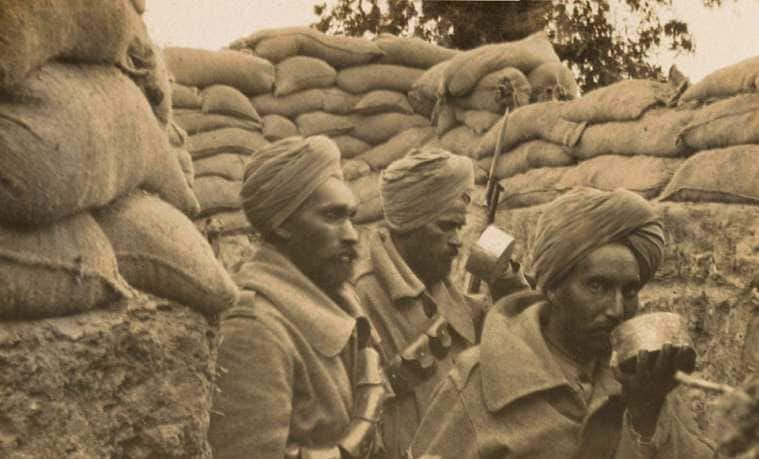 Yet another memoir that is of special significance in capturing the experience of racism in the battlefield is that of Sisir Sarbadhikari’s ‘Abhi le Baghdad’. It provides a detailed narrative of life of an Indian soldier in Mesopotamia under siege and captivity. Sarbhadhikari was part of the Bengal ambulance corps as a stretcher bearer and had arrived in Basra in July 1915. In his memoir Sarbhadhikari records how after the siege of Kut, wherein the British Army was captured by the Ottoman Turks, the treatment of the captives reeked of racism. The British troops were provided with sleeping places in the lower deck while 600 Indian sepoys were cramped into the exposed upper deck. Sarbhadhikari also notes how many among the British troops tried to attack, blaming Indian soldiers for the defeat at Kut.

As far as everyday institutionalised racism in the ranks was concerned, Sarbhadhikari recalls: “The discrimination that is always practised between the whites and the coloured is highly insulting. The white soldier gets paid twice as much as the Indian sepoy. The uniform of the two is different that of the whites is better…In fact, whatever little provisions can be made are made for the Tommy. Even the ration is different- the Tommies take tea with sugar, we are given only molasses” (as cited in Das’ book).

When it comes to racism in death, Basu says it is shocking that the British officers believed that a headstone and proper grave would be of no importance to Indians. “From my research I know that it is not true. I found this letter of a Sikh soldier who tells his officer that he understands that a cremation might not be possible, but he doesn’t mind being buried as long as he has a headstone,” says Basu. “There is evidence that the Indian soldiers cared how they were remembered after death. But to not even provide them with a headstone, or write their name on a memorial, is extremely cruel.”