An elderly Thai immigrant dies after being shoved to the ground. A Filipino-American is slashed in the face with a box cutter. A Chinese woman is slapped and then set on fire.

These are just examples of recent violent attacks on Asian Americans, part of a surge in abuse since the start of the pandemic a year ago.

From being spat on and verbally harassed to incidents of physical assault, there have been thousands of reported cases in recent months.

Advocates and activists say these are hate crimes, and often linked to rhetoric that blames Asian people for the spread of Covid-19.

What's happening in the US?

The FBI warned at the start of the Covid outbreak in the US that it expected a surge in hate crimes against those of Asian descent.

Federal hate crime data for 2020 has not yet been released, though hate crimes in 2019 were at their highest level in over a decade.

Late last year, the United Nations issued a report that detailed "an alarming level" of racially motivated violence and other hate incidents against Asian Americans.

It is difficult to determine exact numbers for such crimes and instances of discrimination, as no organisations or governmental agencies have been tracking the issue long-term, and reporting standards can vary region to region.

The advocacy group Stop AAPI Hate said it received more than 2,800 reports of hate incidents directed at Asian Americans nationwide last year. The group set up its online self-reporting tool at the start of the pandemic.

Local law enforcement is taking notice too: the New York City hate crimes task force investigated 27 incidents in 2020, a nine fold increase from the previous year. In Oakland, California, police have added patrols and set up a command post in Chinatown. 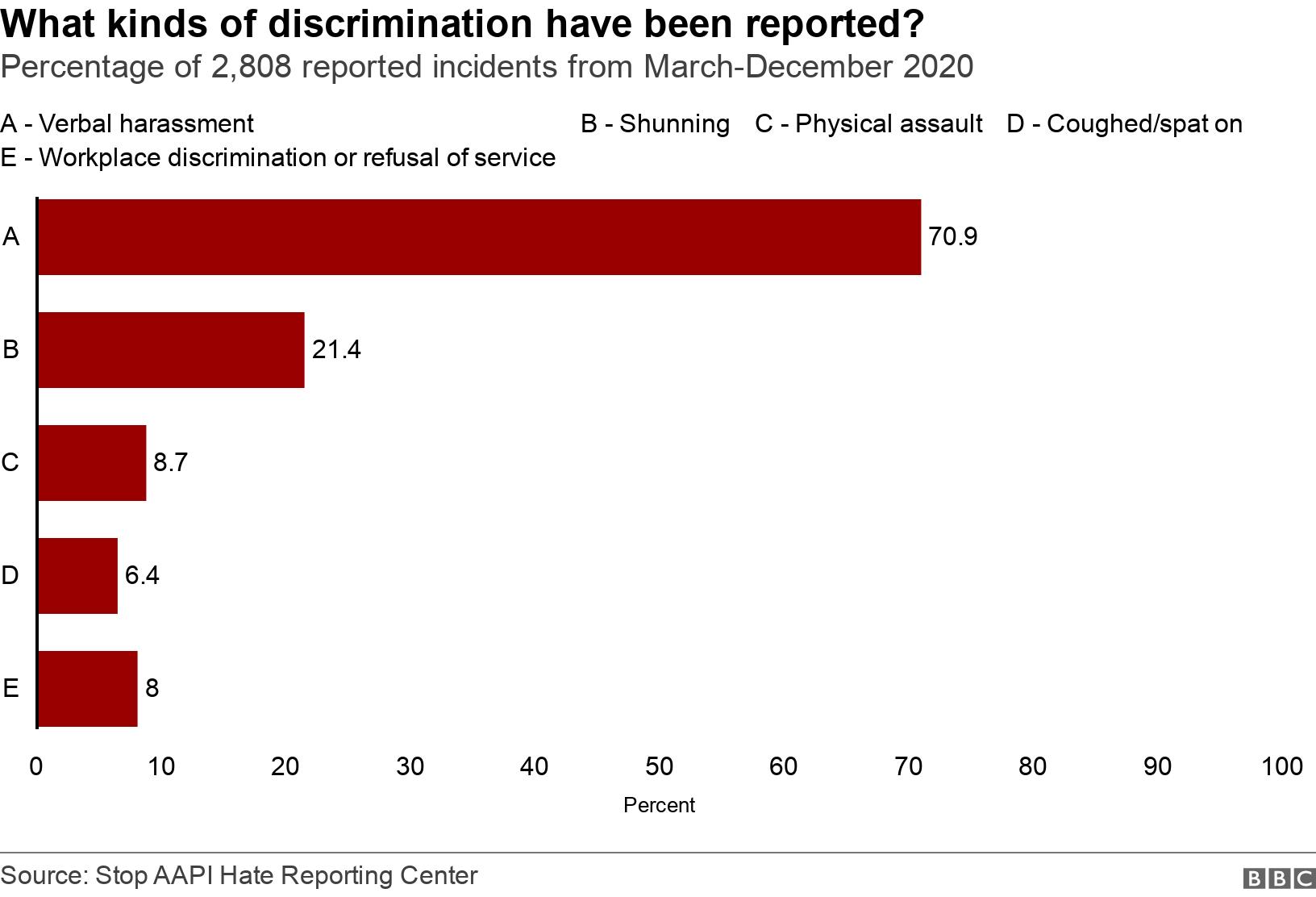 Celebrities and influencers have spoken out after several disturbing incidents went viral on social media.

Here are some of the recently reported attacks:

What's the situation in California?

Over six million Asian Americans live in California, according to the latest population estimates, by far the most in any US state.

They make up more than 15% of residents in the state.

The coronavirus hit the state hard and early, grinding its bustling cities and businesses to a halt. The virus has already claimed over 50,000 Californian lives.

From March to May 2020 alone, over 800 Covid-related hate incidents were reported from 34 counties in the state, according to a report released by the Asian Pacific Policy Planning Council.

Those numbers have since intensified in Orange County, where anti-Asian hate incidents are up by an estimated 1200%, according to the Center for the Study of Hate and Extremism.

Advocates for Asian Americans say the violence can be linked to rising anti-Asian sentiment in the US.

Some have directly blamed the anti-China rhetoric of former President Donald Trump, who often made mention of the pandemic as the "China virus" or the "kung flu".

During his first week in office, President Joe Biden signed an executive action essentially banning the use of such language within the federal government.

And with Democrats now in control of both chambers of Congress, lawmakers and activists are calling for more attention and resources devoted to the issue.

In April, the US Senate voted to pass legislation meant to address the rise in Asian American hate crimes. The bill would designate an official at the US Justice Department to expedite reviews of violence and hate crimes related to Covid-19. It would also provide grants for state and local governments to improve their own reporting systems.

The bipartisan measure passed 94 to one. The bill will now head to the Democratic-controlled House, where it is likely to pass.

On the ground, there are more local efforts to combat the hate too.

In Orange County, neighbours stepped in to help out an Asian-American family after a group of teenagers repeatedly targeted them for months with little police intervention. Neighbours now stand guard outside the family's home each night, the Washington Post reported.

Why is this happening?

These incidents are best explained by the "widespread omission" of Asian Americans within cultural conversations, according to Amanda Nguyen, an activist and the founder of the Rise civil rights not-for-profit organisation.

Although the Asian population grew faster than other major groups in the last US census, the community's stories are not widely covered in the media and its concerns are not polled by political parties, Ms Nguyen told the BBC.

Some federal agencies do not even include the Asian American and Pacific Islander community in their definitions of racial minorities, she notes.

Ms Nguyen says that the people attacking Asian Americans since the pandemic began "can't really differentiate and don't care if we are X, Y or Z".

"They have made us a scapegoat to enact their violence."

For Ms Nguyen, the more visibility anti-Asian crimes receive, the better. She notes that laws can help solve the problem, but the US needs a cultural shift as well.

"We are in a moment of reckoning right now," Ms Nguyen adds. "We have been systematically erased on every single level and people can start to combat that by educating themselves about us."