Zimbabwe without landmines: a crucial step towards development 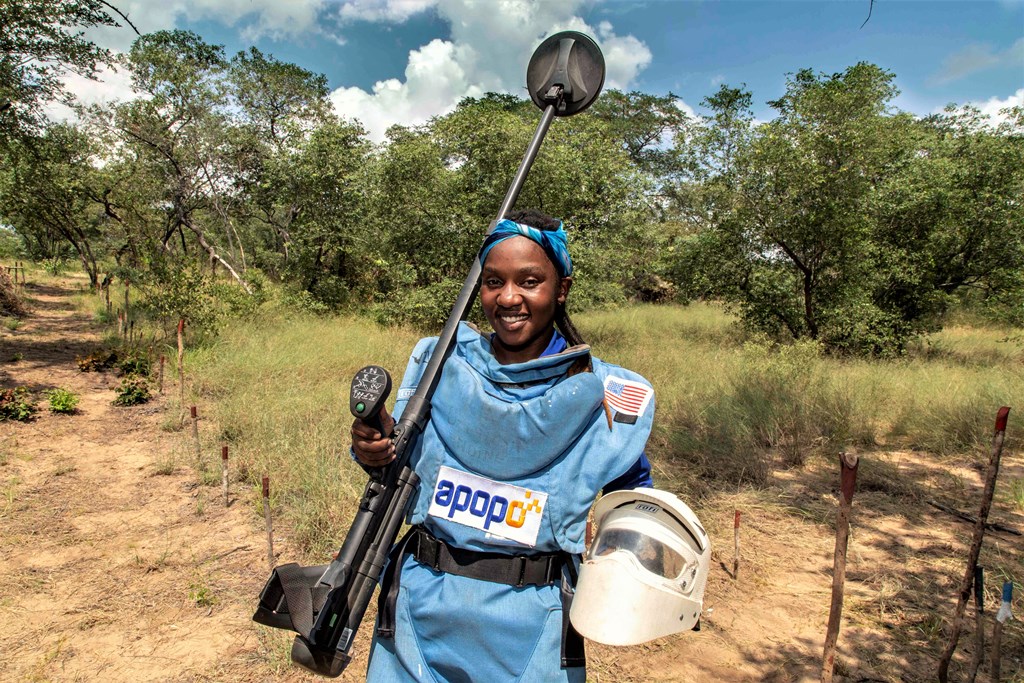 We salute our demining partners and the courageous frontline workers who carry out this dangerous work at great personal sacrifice.

By Brian A. Nichols and Niculin Jaeger

Lying dormant until triggered by a victim and intended to incapacitate, landmines maim civilians and render vast tracks of land unusable.  Mines and unexploded ordnance leave a terrible legacy of war, long after the guns have fallen silent.  Hidden from sight, they continue to kill and injure innocent civilians going about their daily lives, especially children.  Their very presence hinders development and prevents families and communities from being able to return to their land and rebuild.  Zimbabwe knows the long-lasting suffering that mines cause.

Today marks the International Day for Mine Awareness and Assistance in Mine Action.  Signing on to the Convention on the Prohibition of the Use, Stockpiling, Production and Transfer of Anti-Personnel Mines and on their Destruction, also known as the Ottawa Convention, almost 22 years ago demonstrated Zimbabwe’s commitment to meeting its ambitious target of becoming mine-impact free by 2025.  We congratulate the Government of Zimbabwe and partners for reducing the land mine contamination to just over forty square kilometres at the end of 2019, according to the Zimbabwe Mine Action Centre (ZIMAC).  At the end of the war in the late 1970s, landmines covered more than three hundred square kilometres of Zimbabwean land.

Landmines have maimed and killed more than 1,500 Zimbabweans and 120,000 livestock since independence.  Communities living in mine-infested environments live in fear, have limited access to critical resources and basic services, and struggle to derive economic value from what would ordinarily constitute productive land.  The cost of mine clearance, victim assistance, and mine risk education weigh heavily on nation-building efforts in post-conflict states saddled with other competing priorities.  Mine clearance, risk education, and victim assistance unleash development, peace, and inclusion, but this requires support from the state and the international community.

The governments of the United States and Switzerland support Zimbabwe in the effort to clear every single mine through work implemented with ZIMAC and other international partners in various parts of the country.  Our governments invest in demining to protect people from landmines and promote economic opportunities through safe access to land with the goal of clearing all landmines in Zimbabwe by 2025, making it safe for people to move home with their livestock and start cultivating their land again.

The project will also help the free movement of wildlife within the Great Limpopo Transfrontier Park spanning the borders of Mozambique, South Africa, and Zimbabwe.  APOPO estimates it will find and destroy about 15,300 landmines and clear seven square kilometres of land by 2025.  APOPO will coordinate its operations with the Gonarezhou Conservation Trust to ensure the demining operations fulfil the twin objectives of development and sustainable ecotourism with benefits to local communities and the national economy.

The United States is the world’s largest financial supporter of conventional-weapons destruction and leads international humanitarian demining efforts to locate and remove landmines and explosive remnants of war.  The United States supports worldwide demining efforts, including mine risk education, medical provisions (including prosthetics), and vocational training, in partnership with non-governmental organizations and the private sector.

The United States has invested more than US$24 million in Zimbabwe since 1998 to protect people from landmines and promote economic opportunities through safe access to land.  U.S. support for humanitarian demining in Zimbabwe has destroyed more than 42,600 landmines and returned 9.1 square kilometres of land to productive use, directly and indirectly benefitting 411,000 Zimbabweans.  U.S. support has funded mine risk education for over 12,000 Zimbabweans to learn about the dangers of living near minefields.  In 2020 alone, the United States provided US$3 million in humanitarian demining assistance to destroy 6,541 mines and return another 1.44 square kilometres of land to productive use in Zimbabwe.

Switzerland, working with mine-action partners including the Geneva International Centre for Humanitarian Demining (GICHD), the International Committee of the Red Cross (ICRC), and the UN, has committed to a world without new victims of anti-personnel mines, cluster munitions and other explosive remnants of war.  Recognizing the important contribution of mine action towards the promotion of peace, human security, and sustainable development, Switzerland – working in 11 countries – contributed over US$18 million in 2020 towards mine action.  It plays an active role in promoting universal respect and implementation of the provisions of the Anti-Personnel Mine Ban Convention and the Convention on Cluster Munitions (CCM).  Switzerland remains engaged in its role as President of the Second Review Conference of the CCM.  Switzerland’s foreign policy prioritizes protecting civilians and ensuring respect for international humanitarian law.

We salute our demining partners and the courageous frontline workers who carry out this dangerous work at great personal sacrifice.  Their thorough and professional clearance operations gradually hand back land to those displaced many years ago.  To see crops planted and a sense of optimism returning to affected Zimbabwean communities reminds us of exactly why we invest in this important work.

Zimbabwe has accomplished so much, and together we have dug many thousands of mines and unexploded ordnance from the ground that can no longer threaten the lives of Zimbabweans and the country’s stunning wildlife.  We remain committed to supporting Zimbabwe and its demining partners to address the humanitarian and developmental impacts of mines and other explosive remnants of war, help rebuild lives in communities rendered vulnerable by conflict, and develop local capacity for a sustainable and nationally owned demining strategy.  We appeal to the Government of Zimbabwe and the international community to increase financial support for demining to allow Zimbabwe to meet the Ottawa Convention’s obligations and Zimbabwe’s own mine-free 2025 deadline as espoused in the Zimbabwe National Mine Action Strategy 2018-2025.  The achievements of the demining community show that, by working together, we can reach milestones once seen as impossible.