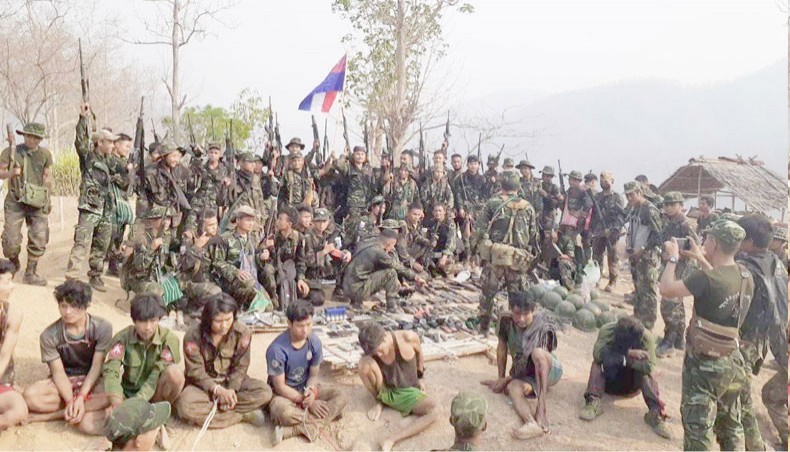 WHEN protesters in the streets of Myanmar began waving signs around in English demanding ‘R2P’ or the ‘responsibility to protect,’ the initial reaction should have been for many a flashback to the last time R2P was invoked — in 2011 by the west regarding Libya.

The violence in Libya in 2011 was part of the wider US-engineered Arab Spring with opposition groups, fronts posing as non-governmental organisations, and even armed factions all backed by the United States and prepared years in advance to carry out a region-wide campaign of destabilisation, regime change, military intervention, and occupation.

At the time, many — including US senator John McCain — promised the Arab Spring would spread deliberately and as part of Washington’s desire to encircle, contain, and eventually overthrow the political and economic orders of Iran, Russia, and China.

The Atlantic in a 2011 article titled, ‘The Arab Spring: “A Virus That Will Attack Moscow and Beijing”,’ would even note:

‘… McCain dropped a pretty big zinger on the crowd.

‘He said, “A year ago, Ben-Ali and Gaddafi were not in power. Assad won’t be in power this time next year. This Arab Spring is a virus that will attack Moscow and Beijing.” McCain then walked off the stage.’

Despite the ultimate failure of the US-engineered Arab Spring to achieve sweeping regime change beyond Libya, it still managed to destabilise or otherwise destroy the regions of North Africa and the Middle East by creating a pretext for a permanent US military presence there, including an enduring occupation of Syria’s eastern region, and the creation of an ongoing conflict that could easily be described as a proxy war against Iran — one of the nations the 2011 Arab Spring was ultimately aimed at.

McCain was a stalwart supporter of US military intervention amid the opening phases of the Arab Spring. He met with US-armed and backed terrorists both in Libya and Syria until his death in 2018.

When he declared that the US-engineered conflict would eventually reach Moscow and Beijing, it was clear even at the time that it would, by necessity. It first needed to arrive in and erode the stability of nations along the peripheries of both Russia and China.

And this is a process that has continued ever since with the US-backed ‘colour revolution’ attacking Ukraine in 2013–2014, Belarus more recently, and both within China and along its peripheries — deadly separatism in China’s Xinjiang region, violent riots in Hong Kong, opposition groups in Thailand openly opposed to close relations between Bangkok and Beijing, and now the crisis in Myanmar.

THE protests in Myanmar in response to the ousting of the US-backed government of Aung San Suu Kyi and her National League for Democracy earlier this year began violently. These were the same political groups that had stormed Rohingya communities years earlier killing residents and burning homes and businesses to the ground. It is unlikely that since then, they’ve adopted ‘peaceful’ methods.

To help spin the violent nature of the protests the western media has depended heavily on faux-human rights groups like the Assistance Association for Political Prisoners who provides baseless ‘tallies’ of dead and detained. The western media never mentions that the AAPP is funded by the US government via the National Endowment for Democracy and that the AAPP’s founder and joint secretary, Ko Bo Kyi, is also an NED ‘fellow.’

Videos of protesters with machetes, swords, bows and arrows, Molotov cocktails, and other weapons fighting with police and soldiers were even broadcasted by the western media, and the occasional mention of police and soldiers dying in the violence was also made. But overall the western media maintained a narrative of a one-sided ‘massacre’ of ‘peaceful protesters’ by Myanmar’s security forces.

We remember the similar narratives told regarding the opening phases of the conflicts in Libya and Syria in 2011.

Western media outlets like the BBC and Reuters attempted to portray the opposition in Libya and Syria as ‘peaceful’ up to and including when footage of opposition groups with war weapons — including tanks — began emerging. Once it became public knowledge of just how heavily armed and organised the opposition was — and when it was time for the US and its allies to openly arm and support them — the western media began ‘explaining’ why ‘peaceful protesters’ had ‘no choice’ but to take up arms.

The exact same narrative now plays out in Myanmar.

Myanmar Now — funded by the US government via the NED as revealed in a Columbia Journalism Review article — in a recent pieces titled, ‘As slaughter of civilians continues, some decide it’s time to take up arms,’ would attempt to sell a similar narrative today. The article claims:

‘Armed only with slingshots, makeshift shields, and Molotov cocktails, Ko Saung and his comrades could see that they were no match for armed forces equipped with lethal weapons and a licence to murder without mercy.

‘That’s why they decided it was time for them to get real weapons of their own, and to learn how to use them. And to do that, they knew they would have to go to border areas, where ethnic armed groups have fought the Tatmadaw for decades.’

The article then explains how only two months into the crisis a parallel government has already been formed and a ‘federal army’ is already prepared to fight Myanmar’s military for control of the country.

‘The Committee Representing the Pyidaungsu Hluttaw, formed by MPs from Myanmar’s ousted civilian government, has offered an alternative: a federal army that includes all forces opposed to the regime.

‘According to the CRPH, the idea is to set up defence plans from the ward/village level to the township level. After it released a statement outlining the proposal, a number of security committees were established in various parts of the country.’

These ‘forces opposed to the regime’ include armed ethnic groups that have for decades received funding, equipment, and weapons from the United States through fronts posing as NGOs. Many of them are listed on the US government’s own National Endowment for Democracy website.

Just like in Libya and Syria, the western media and US-funded propaganda outlets like Myanmar Now are attempting to sell the idea of a ‘pro-democracy’ force of ‘freedom fighters’ that in reality is clearly composed of armed extremists driven by ethnic identity, used by the US for decades to divide Myanmar and bound to burn the nation to the ground in deadly, protracted conflict during its fight with Myanmar’s government — and if successful — with each other in the aftermath.

The CRPH in the days and weeks to come will undoubtedly be recognised by the US and its allies as the ‘legitimate’ government of Myanmar — making it then possible for the US and others to arm, fund, and otherwise aid them in their bid to seize total power over the country.

There will also likely be the opportunity for the US to propose limited military intervention citing the use of Myanmar’s air force against opposition groups armed with war weapons — just as the US did in Libya and attempted (and partially did) in Syria.

The proxy regime will be able to ‘invite’ the US military into Myanmar’s territory — a dream scenario for a US desperate to encircle China with its military, especially by placing its troops in a nation that directly borders China as Myanmar does.

The United States promised its Arab Spring would spread like a virus to the doorsteps of Moscow and Beijing. For China — with Myanmar clearly infected and slowly dying on its border — that day has now come.