Over the years, most states affected by Left Wing Extremism have largely tackled the Maoist problem, with state police rather than central forces playing a key role. In Chhattisgarh, various factors make it a challenge.

On April 3, as 22 security force personnel fell to Maoist bullets in Bijapur, questions were raised not just on possible tactical mistakes by the forces but also on Chhattisgarh’s continued struggle in driving out Maoists from what is arguably their last bastion. Since the 2010 Chintalnar massacre that claimed 76 lives, the Dantewada-Sukma-Bijapur axis has claimed the lives of more than 175 security personnel in Maoist ambushes alone.

Since a crackdown on Maoists starting 2005 in Left Wing Extremism (LWE) states, other states have largely tackled the problem. The number of districts declared Naxal-affected is now just 90, down from over 200 in the early 2000s. Yet Chhattisgarh struggles.

Many have argued that Maoism has been defeated only in states where the state police have taken the lead.

The obliteration of Maoist violence in Andhra Pradesh – the nursery of Maoism in the country—is largely attributed to the state’s Greyhounds. In Maharashtra, where Maoists held sway over several districts, they have now been confined to border areas of Gadchiroli thanks to local police and the C60 force. West Bengal achieved normalcy through an ingenious strategy adopted by the state police. The Jharkhand Jaguars have gained an upper hand in the past few years, and Odisha has confined Maoist activity largely to Malkangiri thanks to broad administrative interventions in Koraput.

“Central forces have the numbers and the training, but they have no local knowledge or intelligence… Only local police can drive out Maoists. The reason we are not succeeding in Chhattisgarh is because the local police have not yet taken the leadership position, although things have improved over the years,” a Home Ministry official said.

Former Andhra Pradesh / Telangana police officer K Durga Prasad, who has fought Maoists as chief of the Greyhounds in the mid-2000s and as chief of the CRPF recently, said: “Whenever it depends on outside forces, no matter how specialised, they will never get the desired results. When it is recognised as your own baby, your commitment and motivation is higher and your learning curve sharper. Decision making is also much faster.”

The Centre formally recognised the gravity of Maoist violence in 2004 when then PM Manmohan Singh called it the “greatest internal security threat for the country”. The Centre opened up purse strings for modernisation of state police forces, among various moves. 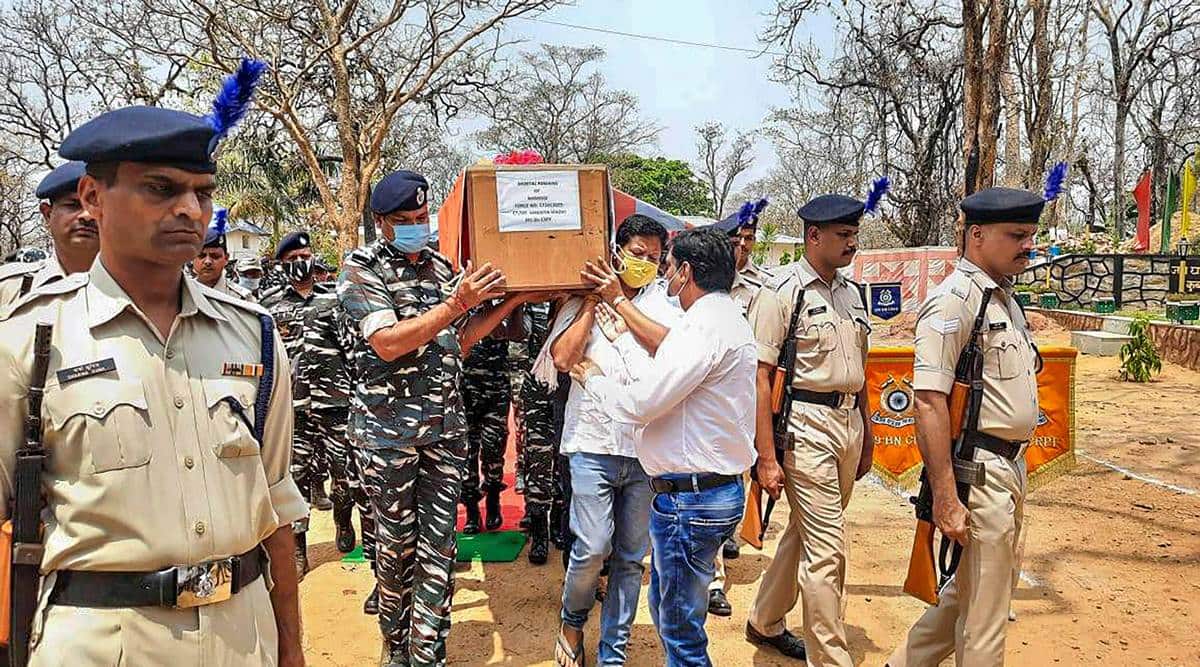 CRPF personnel carry the coffin of a jawan, who lost his life in the encounter with the Maoists, in Bijapur on Sunday. (PTI)

When Maoist violence began in the 1980s, the Andhra police were poorly trained, inadequately funded and with no intelligence as public support was with the Maoists.

In fact, the first funds for intelligence gathering in Karimnagar had to be taken out of the funds meant for erecting a boundary around the SP’s office. “The secret service fund with district police was just Rs 5,000. So we used the Rs 2.5 lakh meant for a wall to pay our sources. We built the wall for free, using our good relations with cement and stone traders,” said an officer who served in Karimnagar and conducted several operations.

Given that the Maoist movement initially had only landlords at its target, the state was late to react. Later, after several setbacks to police, the state realised the importance of capacity building. “Work began on the principle of Defend, Destroy, Defeat and Deny,” said the officer. “We realised that police stations were not fortified and so were frequently targeted by Maoists forcing police to escape or be reluctant to police their area.”

In 1989, the Greyhound were formed. It carried out intelligence-based operations against Maoists, while police and paramilitary personnel were pushed to hold and re-establish the rule of law in the areas cleared.

This was coupled with a focus on development. A department called Remote and Interior Area Development Department was set up. “The SP of the region was made an integral part of the Development Board to take decisions on roads etc… When all administrative wings become focused on one job, the punch of the government becomes mightier,” Durga Prasad said.

Sources said the key to success was coordination between state police and the Greyhounds. “Every IPS officer who joined the state police at that time, and even now, had to spend three months with the Greyhounds… What Andhra police also did was all the powers were given to the local leader in the police set-up… When you centralise, you lose time and then you lose the war,” Durga Prasad said.

West Bengal, the cradle of Naxalism, had stamped out Maoism in early 1970s, but it came back by the late 1990s, when Maoists began targeting CPM cadre in some districts.

Maoists were eventually driven out by state police with robust use of technology and intelligence. “West Bengal police massively used phone interception. That the CPM had a robust network in villages came in handy. By the late 2000s, police had infiltrated almost every dalam of the CPI(Maoist),” said a senior West Bengal cadre police officer who has fought Maoists and is now on central deputation.

Maoists hit back with the 2010 Shilda attack, in which 25 policemen were killed. Following this, police raised a special force, Straco, with women police cadres increasingly in operations for better intelligence gathering.

The final push came after Mamata Banerjee came to power. In 2011, state police killed top Maoist leader Kishenji. Since then, Maoist violence and death of security personnel has gone down consistently in West Bengal — from peaks of 159 deaths of civilians and security forces in 2009, and 252 deaths in 2010, to no incidnets since 2014.

Said K Durga Prasad, “In West Bengal, it was the state police which took the lead and developed intelligence and infiltrated the groups. At the last moment, when they needed the sharp striking capabilities of central forces, they sought help of the CRPF’s CoBRA.”

There was a time in Odisha during the early 2000s when armouries of police stations in Koraput and Malkangiri were kept empty for fear of raids by Maoists. Thanks to rapid infrastructure development, particularly roads in Koraput, and killing of key Maoist leaders in areas such as Narayanpur, Odisha police have confined Maoist activity to parts of Koraput and Malkangiri. Police have raised a force called the Special Operations Group to fight Maoists. However, due to proximity with Chhattisgarh, some trouble continues.

In Maharashtra, much before central forces began pouring in, state police were fighting Maoists in Gadchiroli, Gondia and Chandrapur. Its elite commando force to fight Naxals, the C60, was raised back in 1991, and trained by the National Security Guards and at the Jungle Warfare Academy in Mizoram.

The police have smoked out Maoists from Gondia and Chandrapur and confined their movement in Gadchiroli to areas close to Chhattisgarh. Maharashtra, which saw Maoist violence peaking in 2009 with the death of 52 security personnel and 40 civilians, has now brought down death figures to single digits.

Said former IPS officer K P Raghuvanshi, who established C60: “We realised early the importance of a strong police force in fight against Maoists. That’s why we created C 60. We realised that it is in local terrain and local language that Maoists conduct operations and propaganda. It can be countered only by local fellows… We carried out not only successful operations, but also counter-propaganda.”

Also read |Chhattisgarh Maoist attack: How a massive security operation was planned and how it went wrong

The two states continue to have Maoist trouble in some districts, but violence has been going down. Sources said the Jharkhand Jaguars have coordinated well with the central forces and together they have restricted the movement of Maoist leader Arvindji and his cadres. But a final push is yet to be carried out in districts such as Latehar, which have seen ghastly Maoist attacks in recent years.

Bihar too is raising a special task force, but this is still in its infancy, sources said.

Trouble in Chhattisgarh started after Maoists began to be smoked out of Andhra Pradesh in the early 2000s. It was also the time when the Maoist movement went through a transformation of being a struggle against a class enemy (landlords) to a tribal movement against the state.

It was also a different kind of challenge since Maoists had made strongholds in areas that had not even been mapped, let alone be administered.

Between 2018 and 2020, Chhattisgarh has accounted for 45% of all incidents in the country and 70% of security personnel deaths in such incidents.

“There are no roads, no schools, no hospitals and no police stations. The existing ones are in CRPF camps. No one will approach such a set-up to provide intelligence. Until police begin to function independently and with confidence, things will continue to change at a slow pace,” a senior Home Ministry official said.

Durga Prasad said, “Chhattisgarh is a different challenge. The terrain and demography is different from Andhra. Public have more sympathy for the Maoists there. Salwa Judum turned out to be counter-productive and information sources dried up after that. Also, the enemy strength is huge in Chhattisgarh.”

The Chhattisgarh police too have raised a special counter-Maoist force, called District Reserve Guards (DRG). It is, however, relatively new and constituted differently than the Greyhounds. It has tribal recruits from Bastar and employs surrendered Maoists too. “It has its advantages vis-à-vis local knowledge and intelligence gathering. They are trained well too. But they lack the sharp combat capabilities of the Greyhounds,” said the Home Ministry official.

Durga Prasad said it is important to give freedom to the forces: “Fforming special forces is one thing, giving them the freedom to operate is another. If you don’t do that, no amount of training will help.

A senior IB official said the challenges in Chhattisgarh were very different from Andhra. “These are vast uncharted territories… In Chhattisgarh, we might take a little more time. But we will succeed,” the officer said.