Chad army claims it has stopped rebel drive toward capital

The military of Chad said that it has stopped an advance by Libyan rebels, but the rebel group on April said that it was moving ahead

The Chad military said that it has stopped an advance by Libyan rebels, but the rebel group on April said that it was moving ahead. The United States and British embassies have warned of an attack on the capital in the coming days. Army spokesman Azim Bermandoa Agouna, however, said that clashes had taken place on April 18 in the northern province of Kanem and the rebels from Libya were "totally decimated".

Cherif Mahamat Zene, a government spokesman in a tweet congratulated the security forces and described the rebels as "mercenaries coming from Libya". The location of the rebels was not mentioned but a warning was issued to British citizens that said they were believed to be two royals convoys, reported AP. One rebel convoy was believed to be moving towards the capital and another coming from head to the town of Mao. 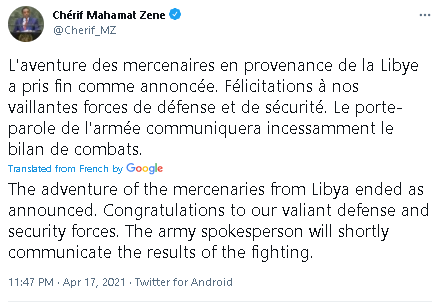 The rebel group known as Front for change and Concord in Chad stated on April 18 that they had started the liberation of the Kanem region. The rebels are believed to have come to Chad a week ago on election day as President Idriss Deby sought to extend his three-decade-long power. While Idriss Deby was certain about his win, but the official results have not been released yet.

“Armed non-governmental groups in northern Chad have moved south and appear to be heading toward N’Djamena,” the department said in a travel alert.

“Due to their growing proximity to N’Djamena, and the possibility for violence in the city, non-essential U.S. government employees have been ordered to leave Chad by commercial airline", it added.